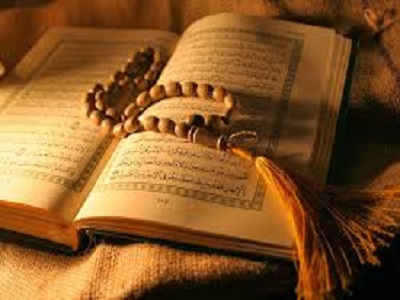 The manuscript of the Qur’an presented here is a very special case. It is a palimpsest, a page whose script has been completely washed off and has again been written upon. After some time the first layer reappeared and can be discerned, somewhat faded, beneath the second layer. It was probably produced not more than a few decades after the death of the prophet Muhammad in 632 and is considered one of the earliest textual witnesses of the Qur’an. At first glance the fact that both layers contain parts of the Qur’an, that is, parts of one and the same text, is highly astonishing. The question is: for what reason did someone wash off a text, only to overwrite it with the same text, using more or less the same style of script?

A palimpsest Qur’an
The palimpsest, of which roughly three dozen fragments have survived, was discovered in 1972 during restoration works on the western wall of the Great Mosque of Sanaa. The chamber in which it had been deposited together with 40,000 other manuscript fragments of the Qur’an seems to have functioned as a kind of storeroom, because one did not dare to throw away religious texts – a practice which can also be found in Judaism.
Among the other fragments of the trove, which are of great importance for Qur’anic studies, the palimpsest takes an exceptional position. That both layers contain parts of the same text is remarkable, and equally interesting is the fact that they are written in the same type of script. This last point indicates that both layers must have originated within a relatively short time interval. This phenomenon can be explained by taking into account the historical context. The rapid expansion of the Islamic Empire after the death of the Prophet Muhammad led to disputes about the exact wording of the Qur’an, because the experts who were scattered over vast areas remembered things differently. Faced with this situation of growing divergences, Caliph Uthman (r. 644-656) – as much is reported by Islamic sources – eventually selected a group of men who where entrusted with the task of reconstructing the authentic wording of the revelation, using all oral and written testimonies that had survived as a basis for this work. The result was an official standard text, the so-called canonical version, and all other prevalent deviating versions were ordered to be destroyed – an order that was not in every place complied with immediately or without resistance.

Original version and graphical reconstruction of the lower layer (detail of fol. 23r). The strong curvature of the lines of the washed-off script that can be particularly observed in the lower part of the page could be a result of the remanufacturing process of the parchment in preparation for the new writing.
But how is the “Qur’an written over the Qur’an” concerned by this? A closer look at the lower layer reveals significant deviations from the uthmanic standard version (which, however, do not change much of the meaning of the text). Hence it is very likely that we have here a precanonical version of the Qur’an that in consequence of the event of the uthmanic redaction had become undesirable and was therefore extinguished. Producing such a manuscript containing a non-official version after the standardization under Uthman is highly improbable. The more so, as already the material value shows that it must have been an expensive specimen. To produce a complete copy of the Qur’an of this size, the skin of more than 200 animals, presumably sheep or goats, would have been needed! This also seems to be one reason why the “old” manuscript had not simply been thrown away: by preparing the pages and rewriting them in the now official version the expensive parchment could be preserved. This makes the palimpsest Qur’an from Sanaa a witness of a significant event in the history of Islam: the final redaction of the Qur’an text.
But not only as such the palimpsest is of great importance. Given the early origin of both layers and given the fact, that the physical conditions reveal their relative chronological order beyond doubt, this manuscript allows valuable insights into the development of the Arabic script and orthography, the dating of manuscripts by comparing the features of different scripts and the production and ornamentation of Qur’an manuscripts in the 7th century.
The rarity and significance of this manuscript are also reflected by its monetary value. Four pages somehow made their way to western auction houses and the last of them – sold in 2008 at Christie’s – broke the world auction record for any Islamic manuscript by fetching the amazing sum of £2,484,500! This even earned it a mention in the British magazine Country Life, that is dedicated to the auctioning and sale of English country houses and, this is noteworthy, some of them are cheaper to buy than the palimpsest page.
References
VON BOTHMER, Hans-Caspar Graf (1988): “Masterworks of Islamic Book Art: Koranic Calligraphy and Illumination in the Manuscripts found in The Great Mosque in Sanaa“, in: W. Daum (ed.), Yemen. 3000 Years of Art and Civilization in Arabia Felix, Innsbruck et al., p. 178-181.
BLAIR, Sheila S. (2006): Islamic Calligraphy, Edingburgh.
DéROCHE, François (2009): La transmission écrite du Coran dans les débuts de l’Islam. Le codex Parisino-petropolitanus, Leiden.
Country Life, 14th edition, May 2008, London, p.154.
PUIN, Elisabeth (2010): “Ein früher Koranpalimpsest aus Ṣanʿā’ (DAM 01-27.1). Teil III: Ein nicht-ʿuṯmānischer Koran“, in: M. Groß & K.-H. Ohlig (eds.): Die Entstehung einer Weltreligion I, Berlin, p. 233-305.
Auction results Christie’s 2008
Description
Qur’an, chapter 32, verse 20 – chapter 33, verse 6 (upper script); chapter 9, verse 121-129 and chapter 19, verse 1-5 (lower script)
Parchment, 37 x 28 cm
About 650 CE
The images of the palimpsest manuscript (fol. 23r) that can be found on this page are kindly provided by Christian Robin and have been realized by funds of the ANR Project “De l’Antiquité tardive à l’Islam“ (DATI, headed by Christian Robin). The graphical reconstruction of the lower layer has been carried out by Hadiya Gurtmann within the Project “Corpus Coranicum” of the Berlin-Brandenburg Academy of Sciences and Humanities (BBAW). A facsimile edition of this manuscript (including the graphical reconstruction of the lower layer) is currently being prepared within the ANR/DFG project “Coranica” (BBAW and Académie des Inscriptions et Belles-Lettres) and is planned to be published in the new series “Documenta Coranica” (ed. by F.Déroche, M.Marx, A.Neuwirth and Ch.Robin) by Brill.