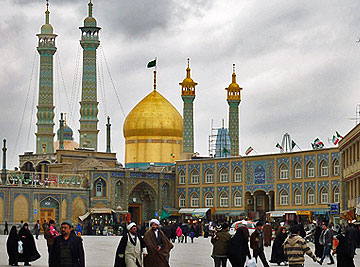 1.1 - Introduction
Qum is the smallest province in Iran. It was previously a district belonging to the state of Arāk, then it was attached to Tehran until it was finally certified as an independent province.

The province has an area of approximately 12,000 square kilometres. It is bounded by Tehran and Sāweh to the north, Delījān and Kāshān to the south, and the Salt Lake and Tafresh to the east. The province includes one city, four regions, nine rural districts and 256 villages. Since it adjoins the central desert, Qum has a semi-desert climate.
In 1947 C.E, its population was no more than 150,000 but by the time of the Islamic Revolution in 1979 CE, the population of Qum had reached about 400,000. After the revolution, the city underwent rapid growth and its current population approaches 1,000,000, a large number of whom are religious students coming from all over the world to study in this great centre of Islamic Learning, under the holy patronage and in the blessed presence of Lady Fatima Masuma (A).
Aside from being a world-renowned centre of Islamic knowledge, Qum is also:
• an agricultural city, producing wheat, cotton, pomegranate, fig, pistachio and melon.
• an industrial city, manufacturing carpets, pottery, plastic products and building materials.
• a commercial city, due to its location at the crossroads that connects northern Iran to its south, and the vast number of pilgrims.
A slight disadvantage of Qum’s location is that its main water supply is through the salty rivers that come from the mountains around it.

1.2 - The history of Qum
In the period just before the advent of Islam, Qum was populated by Zoroastrians. The city was conquered by the Muslims in 23 A.H, under the command of Abū Mūsā Ash`arī, and has remained Muslim since.1
In 66 A.H, after the uprising of Mukhtār (who was seeking revenge for the murder of Imam Husain (A) in Karbalā), a group of his Shi`a followers from the Banī Asad tribe travelled from Kufa to Qum, and took refuge in the area of Jamkarān.2
In the year 83 A.H, a large number of Arabs belonging to the Ash`arī tribe of Yemen, migrated and settled in this region and repopulated the city.
From the beginning of its Islamic history, the city of Qum became the centre of the Shi`a in the area, and by the end of the first Islamic century, more than 6000 Shi`a had settled in the city.
The Shi`a of this city revolted against the Umayyad caliphs and after the inception of the Abbasid caliphate in 132 A.H, they also remained at odds with the Abbasid caliphs.
In the year 200 A.H, when Imam al-Ridā (A) was on his way from Madina to Khurāsān, he passed through Qum, and the house where he stayed was later converted into a Madrasah (an Islamic seminary).3
In the year 201 A.H, Lady Fatima Masuma (A) came to the city, and after a brief illness, she died and was buried there. Her sacred grave became a pilgrimage site for the Shi`a, and the city of Qum was thereafter popularly called “Qum-e Muqaddas” (the Holy Qum).
Over the centuries, Qum emerged as a Shi`a learning centre. The Islamic Seminaries (al-Hawzah al-`Ilmīyah) in Qum became particularly popular after the Islamic Revolution in Iran and also due to the decline of the seminaries in Najaf, following the persecution of the hostile regime in Iraq.

1.3 - The Islamic Seminaries of Qum
Qum is well known for its many religious seminaries and institutes that offer advanced religious studies. These collectively make up the Hawzah (a short form of al-Hawzah al-`Ilmīyah), which presently consists of over 200 education and research centres and organisations, catering for over 40,000 scholars and students from over 80 countries of the world.
From the earliest arrival of the Shi`a in the first Islamic century, schools and Madrasahs were set up for learning and propagating the teachings of the Prophet (S) and his household (A).
The first of these Madrasahs is attributed to the Ash`arī family, who settled in Qum towards the end of the first century and set up a Hawzah. When Imam al-Sādiq (A) heard about this establishment, he gave the good tidings of the future greatness of Qum.4
The Hawzah gained strength and was further blessed with a visit by Imam al-Ridā (A) at the beginning of the third century. The house in which Imam (A) resided was later converted to a Madrasah, known as “al-Radawīyah”.5
However, it was after Lady Fatima Masuma (A) was buried in Qum, that Shi`a scholars began to gather around her shrine and Qum gained a reputation as a centre of higher religious learning.
During this period there were many great Shi`a scholars, including Ahmad ibn Ishāq Ash`arī Qummī, who was the deputy of Imam al-`Askarī (A) in Qum and who was privileged to have been shown the infant Imam al-Mahdī (A).
Under the orders of Imam al-`Askarī (A), Ahmad ibn Ishāq built the oldest mosque in Qum today, the Masjid-e Imam.6
Probably the greatest Qummi scholar of the fourth century was Shaykh Abū Ja`far Muhammad ibn Ali Bābawayh Qummī, popularly known as Shaykh Sadūq (d. 381 A.H). It is famously reported that he was born as a result of the prayer of Imam al-Mahdī (A).
The Hawzah continued to gain strength and the sixth century writer, Shaykh `Abd al-Jalīl Rāzī, reported over ten active Madrasahs in Qum at his time.
The Safavids, who ruled Iran from 905 A.H until 1135 A.H, were great patrons of the Hawzah and provided financial assistance for the construction of new Madrasahs and for improving the facilities for the students.
It was at this time that the Madrasah Faydīyah was built.
Great scholars of Qum of this era include, Mullā Sadrā Shīrāzī, (the author of Asfār), and his two illustrious sons-in-law, Mullā Muhsin Fayd and Mullā `Abd al-Razzāq Fayyād. Shaykh Bahā’ī is also reported to have spent some time in Madrasah Faydīyah during this period.7
The presence of these great scholars in Qum was a great boost for the Hawzah and their influence persisted in the rule of the Qājārs, who ruled Iran between 1200 A.H and 1339 A.H. During this time, the Hawzah was under the guardianship of great scholars such as, Grand Ayatollah Mīrzā Abū al-Qāsim Qummī, Grand Ayatollah Mīrzā Muhammad Fayd and Grand Ayatollah Shaykh `Abd al-Karīm Hā’irī.
Grand Ayatollah Hā’irī (d. 1355 A.H) is credited with reviving the Hawzah of Qum and setting the foundation of the present day organisation. He organised the classes and syllabi, devised a system of examinations, arranged the stipends for the students and brought uniformity to the formal dress of the scholars. During his time, the Hawzah gained world-wide fame and over 3,000 students flocked to Qum to study. Some of the well known scholars who studied under him were Grand Ayatollah Shaykh Muhammad Ali Arākī, Grand Ayatollah Sayyid Muhammad Ridā Gulpaygānī and Grand Ayatollah Sayyid Ruhullāh Khomeini.
After the passing away of Grand Ayatollah Hā’irī, the running of the Hawzah fell to the responsibility of Grand Ayatollah Sayyid Muhammad Hujjat, then Grand Ayatollah Sayyid Sadr al-Dīn Sadr and then Grand Ayatollah Sayyid Muhammad Taqī Khānsārī.
Then came the era of the eminent scholar, Grand Ayatollah Sayyid Husain Burūjerdī (d. 1380 A.H), under whom the Hawzah gained new heights. He built a great mosque next to the shrine of the Lady Fatima Masuma, called “Masjid-e A`đam”.
After the victory of Islamic Revolution in Iran, the political pressure on the Hawzah and religious scholars and students was removed and the activities of the Hawzah were expanded.
At present, a high council of scholars (Shurā-ye `Ālī-ye Hawze-ye `Ilmīyeh-ye Qum) appointed by the Supreme Leader and Grand Ayatollahs (marāji`) supervise the Hawzah. Under this council, there is an administrative body that runs the religious training of over 40,000 students in Qum.

1.4 - Other places of interest in Qum
Museum of the holy shrine
The museum, which is called “the Āstāne Museum”, is attached to the Madrasah Faydīyah, abutting the new courtyard. It contains the gifts and bequests that have made to Lady Fatima Masuma (A) over the years by various well-wishers.
Prior to the establishment of the museum in 1314 A.H./1925 C.E, the endowed treasures of the sanctuary which are now on display were stored in what was termed "the treasury". The treasury was deemed necessary by the custodians of the sanctuary after a spate of thefts at the end of the Safavid period.
In 1992 C.E, as a result of the extra acquisitions of the museum, the basement level of the building was refashioned and annexed to the museum. The result was a museum complex, including administrative rooms, display areas and restoration facilities in some 1000 square metres. The displays are on two floors and include costly carpets, coinage, artwork and rare manuscripts of the Holy Qur’an.
Masjid-e Jamkarān
This mosque was built in 293 A.H, during the Minor Occultation (al-Ghaybat al-Sughrā) of Imam Mahdī (A), and according to his recommendation.
Grand Ayatollah Sayyid Shahāb al-Dīn Mar`ashī Najafī (d. 1411 A.H) writes, “This mosque was established from the earliest days of the Ghaybah…8 Imam al-Mahdi (A) has been continuously seen at this mosque since that time...Shaykh Sadūq enlarged the mosque and during the Safavid era it was repaired several times...I personally have witnessed numerous miraculous events at this mosque...In short, there is no doubt that this mosque is one of the frequenting places of Imam Mahdi (A), and, after Masjid-e Sahlah in Kufa, it is the most probable site for a viewing of the Imam (A).”9
The mosque is situated six kilometres to the south-east of Qum, and draws large crowds of pilgrims, especially on Tuesday nights. According to many reports, this is the night on which the Imam (A) visits this mosque.
Musallā-ye Quds
This is a large mosque situated near Safā’īyeh Square in Qum and is the location for the weekly Friday prayers. Presently, the three Imams of Friday prayers are, Ayatollah Ali Meshkīnī, Ayatollah Ibrāhīm Amīnī and Ayatollah Jawādī Āmulī.
The huge silver-coloured dome of this beautiful mosque, which is currently under construction, is a familiar landmark in Qum.
Various shrines of children of the Imams (A)
Various members of the family of Imams (A) migrated to Iran after Imam al-Ridā (A) moved to Khurāsān. After the martyrdom of the Imam (A), many of them came to settle in Qum, the major Shi`i centre at the time. It is estimated that there are over 400 graves of these members of the family of the Imams (Imāmzādehs) in Qum. 10
Some of these graves are within the holy shrine of Lady Fatima Masuma (A). They are situated at different locations in the shrine, some with small domes of their own. These days, the chambers in which their graves are situated also serve as administrative offices for the various departments in charge of the shrine.
Other graves are scattered around the city, for example:
• Mūsā Mubarqa`, son of Imam Taqī (A) is buried in Āzar Square, where there is also a large burial site called “Chehel Akhtarān” which was reserved as a burial area for the descendants of the Prophet (S).
• Imāmzādeh Ahmad, the grandson of Imam al-Sādiq (A), is buried at “Darvāzeh Qal`eh” in the southern side of Qum.
• Ali ibn Ja`far (A) is buried in “Chahār Mardān.”
There is a narration that whenever one visits these graves of the pious descendants of the Prophet (S), one should recite the following salutation:11
اَلسَّلامُ عَلَيْكَ اَيُّها السِّيِّدُ الزَّكِيُّ، اَلطّاهِرُ الْوَلِيُّ، الدّاعِي الْحَفِيُّ، اَشْهَدُ اَنَّكَ قُلْتَ حَقًّا وَنَطَقْتَ حَقًّا وَصِدْقًا وَدَعَوْتَ اِلَى مَوْلايَ وَمَوْلاكَ عَلانِيَةً وَسِرًّا، فازَ مُتَّبِعُكَ وَنَجَى مُصَدِّقُكَ وَخابَ وَخَسِرَمُكَذِّبُكَ وَالْمُتَخَلِّفُ عَنْكَ، اِشْهَدْ لِي بِهِذهِ الشَّهادَةِ لاَِكُونَ مِنَ الْفائِزينَ بِمَعْرِفَتِكَ وَطاعَتِكَ وَتَصْدِيقِكَ وَاتِّباعِكَ، وَاَلسَّلامُ عَلَيْكَ يا سَيِّدِي؛ اَنْتَ بابُ اللهِ الْمُؤْتَى مِنْهُ وَالْمَأْخُودُ عَنْهُ، اَتَيْتُكَ زائِرًا وَحاجاتِي لَكَ مُسْتَوْدِعًا، وَها اَنَا ذا اَسْتَوْدِعُكَ دينِي وَاَمانَتِي وَخَواتِيمَ عَمَِلي وَجَوامِعَ اَمَلِي اِلى مُنْتَهى اَجَلِى، وَاَلسَّلامُ عَلَيْكَ وَرَحْمَةُ اللهِ وَبَرَكاتُه