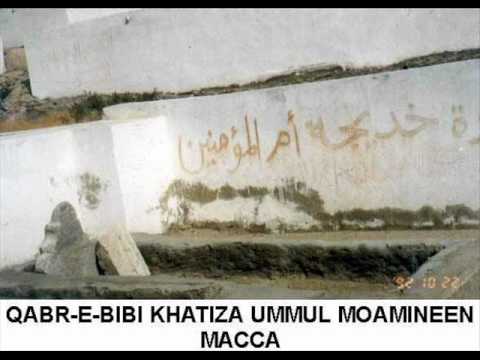 children which I was not destined to have through other women." (Sahih Bukhari)
These are not the emotional words of any ordinary husband lamenting the loss of a wife. These are, in fact the words of the Last Divine Messenger to mankind, who, as God vouches in the Holy Qur’an: “Does not speak out of desire. It is naught but revelation that is revealed.” (53:3,4)
Prophet Muhammad (SAWA) did not express these words in the state of bereavement at the passing away of the faithful Khadija (SA), who for over 25 years was his one and only spouse. He said these years later when one of the many wives that he had taken in the last ten years of his life out of social necessity, dared to mock the memory of the Mother of all true Believers (Umm al-Momenin) and thought herself as a younger and better wife. (Those interested in the identity of that barren woman who was duly reprimanded by the Prophet for her insult to the memory of Hazrat Khadija (SA) should refer to authentic compilations of hadith including the one by the esteemed Sunni scholar Bukhari).
A closer scrutiny of the Prophet’s tribute to his beloved wife reveals some interesting facts. It is a confirmation of the great sacrifices offered by Hazrat Khadija (SA) to the cause of Islam and Muslims. She was no ordinary Arab lady. As the daughter of the noble Khuwailed, she was linked five generations earlier to the same pedigree as the Prophet’s. She was respected in the pre-Islamic society of Arabia, not mere for her vast wealth that earned her the title of Malikat al-Arab (Queen of Arabia) but for her wisdom, knowledge, dignity, excellent temperament and above all chastity to the extent that she was acclaimed as Tahera (Spotlessly Pure).
On hearing of the reputation of Prophet Muhammad (SAWA) – who had not yet been commanded by God to announce his mission – as Sadeq (Truthful) and Ameen (Trustworthy), she entrusted him with management of her trade caravans. Impressed by the 25-year old youth’s honesty in discharging his duties, she proposed marriage to him, thereby setting a lasting precedent (as is evident in the Aqd formula for every Muslim marriage) that it is the woman who proposes and the man who accepts.
The Prophet consulted his uncle and guardian Hazrat Abu Taleb (AS), and history bears witness that the latter along with his younger brother Hazrat Hamza (AS) and other chiefs of prominent Arab families assembled at the house of Hazrat Khadija (SA) to formally seal the marriage offer. The nuptials were solemnised with great rejoicing by Abu Taleb (AS) who recited the khutba on behalf of his nephew the groom.
For the next quarter century they made the perfect husband and wife pair. Fifteen years after marriage when divine revelation dawned upon the husband the dedicated wife immediately believed in his mission as the Almighty’s Last Messenger to mankind and thereafter spent all her wealth in the propagation of Islam and protection of the neo Muslim community from persecution and poverty. Afif al-Kindi, who years later became a Muslim, says that on one of his visits to Mecca he accompanied Abbas ibn Abdul-Mutallib to the Ka’ba where an unfamiliar sight greeted him. He saw a man praying in what appeared to him a strange manner, while behind him stood a lady and a lad, earnestly emulating his acts of worship as he bent down in genuflexion (ruku’) and touched his forehead on the ground in prostration (sajda). He was told that the gentleman was (Prophet) Muhammad (SAWA), the lady was his wife Khadija (SA) and the lad was his cousin and ward, Ali ibn Abi Taleb (AS). Afif was told: Besides these three there is no one in the world professing the new faith.
The couple had several children including son Qasem, from whom the Prophet derived his agnomen (kunya) Abu’l-Qasem. But all died in infancy except the youngest daughter Fatema az-Zahra (SA), who was conceived after the Prophet’s return from Me’raj (ascension to the heavens in the twinkling of an eye) and his tasting of the fruits of paradise. That is one of the reasons God has referred to Hazrat Fatema (SA) as Kowsar (Spring of Perpetual Abundance) in the Holy Qur’an.
Islam will forever remain indebted to the sacrifices of Hazrat Khadija (SA), who as part of her selfless jihad for faith, endured three years of socio-economic boycott imposed on the Muslims by the pagan Arabs led by Abu Jahl and Abu Sufyan. During those days of confinement to the mountain pass outside Mecca known as She’b Abi Taleb, she spent everything, up to her last dirham, for the sake of Islam, to protect and feed the persecuted neo-Muslim community. Often, her future son-in-law, Imam Ali (AS) would risk his life to procure the needed grains for the Muslims. When she passed away on 10th Ramadhan shortly after uplifting of the siege by the frustrated pagans, the wealthiest Lady of Arabia had no money left for even a shroud, let alone leaving any inheritance for her daughter Fatema (SA). She was shrouded in the cloak of her weeping husband and laid to rest in the Jannat al-Mu’alla Cemetery, which alas was desecrated and destroyed by the Saudi Arabian authorities in 1925.
The sacrifices of Hazrat Khadija (SA) for Islam and her sufferings at the hands of ingrate Muslims (including the barren woman who dared to mock her memory in order to annoy the Prophet) do not end with her passing away. History bears witness that whenever Islam and Muslims were in danger it was the progeny of Khadija (SA) that rose to the rescue with Karbala being the crowning moment of the Great Sacrifice by her grandson Imam Husain (AS). The fact, that till this day in every corner of world, her direct descendants are known by their honourific epithet of Seyyed, is a lasting testimony to the only true Mother of all Believers.