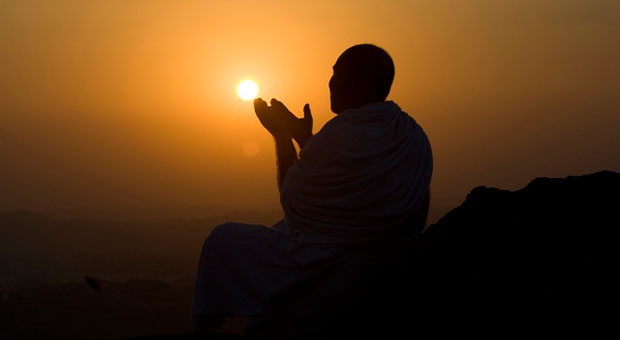 These ayaat once again presents the importance of rising up and being engaged in the midnight prayer. And reading Quran in that period of time when the heedless people are drowned deep into their sleep. Hence we mentioned before prayers in the midnight particularly near the dawn and day break. It has tremendous effects and particularly in the purification of the soul which refines the inner self, trains the human beings spiritually and creates the purity and wakefulness of heart, the strengthens the faith and the intentions, fortifies the foundation of faith’s in the hearts of man which by a single test, a man can obviously feels its effects in his inner self.
For this reason beside the ayaat of Quran, in its narration also it is stressed upon that matter.
It is said in one of the narration of Imam Sadiq alaihis salam: there are three thing which have the amazing blessings from the Generous God.
1- The midnight prayers
2- providing iftar food for those who fast
3- The meetings of Muslim brothers.
In another hadis from same imam we read in the definition of the ayaat:
The good deeds removes the evils
إِنَّ الْحَسَنَاتِ يُذْهِبْنَ السَّـيِّئَاتِ
He said: The midnight prayers vanishes away the sins of the day.
In the Sura Asra too we discussed in detail about this topic in the interpretation of the ayat 79 and we quoted there ten interesting narrations about the importance of the midnight prayers.
وَمِنَ اللَّيْلِ فَتَهَجَّدْ بِهِ نَافِلَةً لَّكَ عَسَى أَن يَبْعَثَكَ رَبُّكَ مَقَامًا مَّحْمُودًا
(17:79)
And in some parts of the night (also) offer the Salat (prayer) with it (recite the Quran in the prayer), as an additional prayer (Tahajjud optional prayer Nawafil) for you (O Muhammad SAW). It may be that your Lord will raise you to Maqaman Mahmuda (a station of praise and glory, the highest degree in Paradise:
إِنَّ نَاشِئَةَ اللَّيْلِ هِيَ أَشَدُّ وَطْءًا وَأَقْوَمُ قِيلًا
(73:6)
Verily, the rising by night (for Tahajjud prayer) is very hard and most potent and good for governing (the soul), and most suitable for (understanding) the Word (of Allah).
إِنَّ لَكَ فِي اَلنَّهَارِ سَبْحًا طَوِيلًا
(73:7)
Verily, there is for you by day prolonged occupation with ordinary duties,
وَاذْكُرِ اسْمَ رَبِّكَ وَتَبَتَّلْ إِلَيْهِ تَبْتِيلًا
(73:8)
And remember the Name of your Lord and devote yourself to Him with a complete devotion.
رَبُّ الْمَشْرِقِ وَالْمَغْرِبِ لَا إِلَهَ إِلَّا هُوَ فَاتَّخِذْهُ وَكِيلًا
(73:9)
(He Alone is) the Lord of the east and the west, La ilaha illa Huwa (none has the right to be worshipped but He). So take Him Alone as Wakil (Disposer of your affairs).
وَاصْبِرْ عَلَى مَا يَقُولُونَ وَاهْجُرْهُمْ هَجْرًا جَمِيلًا
(73:10)
And be patient over what they say and avoid them with gracious avoidance.

The effect of the prayers in the mid night
These ayaat the same way continued and discussed about the midnight prayers, the spiritual instructions in the shadow of reading Quran in the middle of night. In fact it is presenting the proves that came in the previous ayaat and said: This command of worship and the midnight recitation of Quran is to programme the worship and instruction for the night, made them stand more firmly with perseverance in their cause.
إِنَّ نَاشِئَةَ اللَّيْلِ هِيَ أَشَدُّ وَطْءًا وَأَقْوَمُ قِيلًا
(73:6)
نَاشِئَةَ is taken from the word نشي which means the accident, it have three definitions to understand its meaning.
First of al, the meaning of the hours of night as it is created one after another or particularly they are the hours at the end of night or the dawn.
As in a hadis from Imam Baqir alaihis salam it is quoted: It means to get up from the bed in the last hours of the night for namaz of late night.
In another hadis by Imam Sadiq alaihis salam in the definition of that ayat it is said: By getting up from the bed in the late night means its purpose of worshiper must not be other than God The Great Forgiver.
Thirdly in these particular hours of the night the spiritual and pious conditions and divinely pleasure and eagerness upraises in the heart of man which had great, deep and long lasting effect upon the human soul.
وَطْءًا means to step same way to accord too.
أَشَدُّ وَطْءًا hard work and toil which the midnight prayers have or which mean firm and steady effect in the shadow of this prayers, one achieve in his soul and inner self.
It had the presumption that it has utmost accord between the heart, eyes and the ears. And their mobilization is created in the way of prayers.
أَقْوَمُ is taken from the word standing which means to stand firm and candidly.
قِيلًا to say something, here it means to remember the Almighty Lord and reciting the Quran.
Altogether this ayat is among the ayaat with the meanings, full of contents is the most expressive words about the midnight worship, the prayers of daybreak, expressing fondness of heart with the lover in the moments when all the means of calmness of soul is more available than the other moments. Same way its effects is mentioned in taming of real self, nurturing the soul and human life. It shows that the human soul, at those hours is well prepared for the remembering, thinking, praising and admiring the Beloved God.
In the next ayat it adds: This is for the purpose that you may continue your efforts and struggles in the day hours.
إِنَّ لَكَ فِي اَلنَّهَارِ سَبْحًا طَوِيلًا
(73:7)
Persistently guide the people and confer the message of Sovereign Lord and solve the social and individual problems, you spare no enough time for the prayers and the praise of the Majestic God. As a result bring this midnight worship at the place of it.
The another possibility in the definition of the ayat and in every way which is interesting and co ordinates with the above and alter ayat which said: As around the day you have upon your shoulders the heavy duties, a lot of endeavours and strivings, you have to make yourself powerful with the midnight prayers and prepare yourself for these extensive and enormous activities from that raising up in the night.
سَبْحً means movement. As if it resembles the human society with the widespread ocean and a large group is going to drown in it and the thundering waves moves them everywhere and the ships are wandering and seeking the refuge. The prophet of Islam is the only saviour of those who are drowning in this ocean and the noble Quran is the only ship to save in this vast ocean.
This perfect swimmer must get prepared for conferring daily this great duty of prophecy.
Then after the command to stand for worship in the night and short indication towards its profound effects described the five complete rules and said: remember the names of your Lord.
وَاذْكُرِ اسْمَ رَبِّكَ
It is quite apparent that by the term remember the lords name is to concentrate upon its meaning as the remembrance by the words is the beginning of the tribute by the depth of heart. And this hearty recollection bestows glowing purity to the life and soul and waters the plant of piety and thoughtfulness in the heart.
Here the word رَبِّ indicating that whenever you recite his holy name concentrate upon his endless blessings and how he continuously nurturing you.
One of the interpreters described the stages about the recitation of the Providers name as follows: In The first stage to recite his name the above ayat mentioned about it.
The next stage comes to remembrance of his clean and pure existence in the heart as reveal in the sura e Araf ayat 205
وَاذْكُر رَّبَّكَ فِي نَفْسِكَ تَضَرُّعاً وَخِيفَةً
7:205 And remember your God the Provider in your heart with sincerity and fear.
Finally the third stage reaches and in this stage from the status of the sovereign lordship attained the phase which is the status of the total qualities of the beauty and glory of the God that is accumulated in Allah. Hence in the ayat 41 of the Sura e Ahzab it is said:.............