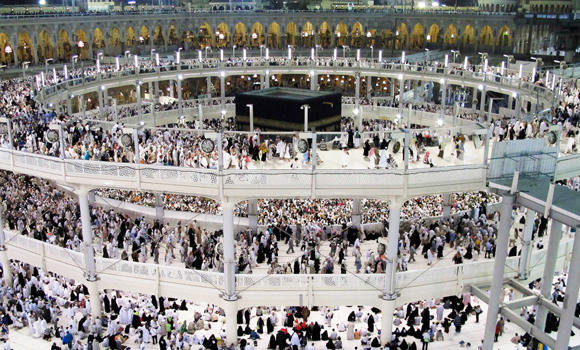 Question: A two-level bridge has been built recently around the Holy Ka'abah. Is it permissible for an able-bodied or a disabled pilgrim to perform tawaf on those bridges, of free choice or out of necessity? What is the Islamic law about offering tawaf prayer there?

Answer: As for the first level of the bridge, performing tawaf on it would be valid even in the state of free choice. Of course, when it comes to obligatory tawaf, one must, as a measure of necessary precaution, observe the regular succession (muwalat) between performing the tawaf and its prayer. If it is possible to offer the tawaf prayer on the bridge itself beyond and close to the maqam (station of Ibrahim), there is no problem.
As for the second and upper level of the bridge, if the duty-bound (pilgrim) finds that the bridge is situated lower than the wall of the Ka'abah even to the extent of one span, it is permissible to perform tawaf on it as well. In case, however, it is not possible for the pilgrim to observe regular succession between the obligatory tawaf and its prayer (since it takes long to go down to the courtyard of the Mosque – not ten minutes or less), the tawaf would not be correct on his part, as a necessary precaution. This ruling applies to the able-bodied who may choose to perform tawaf on the upper level of the circular bridge. As for the sick and disabled who use wheelchairs and are not allowed to perform tawaf except on the upper level, it is permissible for them to perform tawaf on the bridge and the tawaf will not be affected, even if the pilgrim fails, owing to being compelled, to observe succession between the tawaf and its prayer.
If the duty-bound has not made sure about the upper level being lower than the wall of the Holy Ka'abah, even to the extent of a span, the tawaf would not be in order. If he is a disabled pilgrim who is using a wheelchair and is not allowed to perform tawaf anywhere other than the upper level of the bridge, he should combine between tawaf from there and choosing a representative who would perform tawaf on the courtyard of the Grand Mosque or on the lower floor and he himself should offer the tawaf prayer.